Cloudy [1] is a distribution based in Debian GNU/Linux [2] developed under the CLOMMUNITY european research project.[3]

This distribution, inspired in the idea of the old Guinux [4], facilitates the deployment and the management of cloud services[5], as well as sharing them. Particulary intended to the community network[6] users.

Prior to the general adoption of cloud services[5], users of Community Networks (CNs[6]) already shared or provided services and resources to the community, however, these users were only a minority. One of the reasons identified is the technological barrier. Before providing content, users willing to share information with the community have first to take care of the technical aspects such as the deployment of a server with a set of services.

In the past, users from the Guifi.net CN tried to overcome this problem by releasing a GNU/Linux distribution named Guinux [4], which provided end users an easy way of offering network services to the community (like HTTP proxy, DNS systems and MRTG graphic interfaces).

The key part of the distribution was a set of scripts[7] that automatised the configuration process. End users were only asked for a few parameters such as their e-mail address and the node identifier. Shortly after the distribution was made available the number of end users sharing resources proliferated.

According to that, it became clear that lowering (or removing) the technological entry barrier encouraged users to provide more services and share their resources with the community. To this end, one of the goals of the CLOMMUNITY [3] project is to release a GNU/Linux distribution, codenamed Cloudy, aimed at end users, to foster the transition and adoption of the Community Network cloud environment.

The Cloudy distributión is thought to satisfy the following requirements:

To coordinate the devices with TincVPN, a tool to automate the system deployment has been developed as part of the project. This software, named Getinconf[11], takes care of the TincVPN configuration process and the exchange of keys with the rest of the cloud nodes.

As Cloudy is based in Debian, it has the same hardware requirements.[14]

The binary image have a set of configurations and additional packages; thus are needed arround 450 MiB of free storage space. Anyway, it is recommended to have at least 1 GiB.

If you want to use some services like PeerStreamer (read below) the minimum requirements will increase, both storage, memory and processing.

Actually you can obtain the Cloudy distribution by downloading an ISO image ready to burn in a CD or USB memory, or by downloading a template (LXC container[15] or OpenVZ[16]) ready to be executed in a virtual machine.

Alternatively you can download the source code and compile it by your own.

Go to the Cloudy site where image are stored:

Currently is in development and is only available the unstable branch.

There you will find:

The ISO file is a live install CD image, it means that it has installation system which is executed from a removable device (CD/DVD/USB) at boot.

You can burn it in:

In order to build or compile Cloudy some programs are needed in your machine to download the sources, generate the binaries, manipulate the ISO images, etc.

1. Download the needed packages (example with the apt tool in the Debian based systems):

2. Download the "builder" LBmake (Live-Build Make) to create the image:

3. Compile and generate the ISO image (and the Linux container):

4. Once the image is generated you can test it virtualizing the system with QEMU.[17]

NOTE: if you have a relatively recent machine, adding the option '-enable-kvm' you will take profit from the hardware virtualization, it will increase the speed and performance.

Optionally, from the ISO image you can create a Linux container with the following command:

NOTE: before generating the container you have to create the ISO image first. If not, the previous command will generate firstly the ISO and after the container.

As it is explained in the introduction, the Cloudy distribution is based in Debian GNU/Linux and made in a live ISO image.

You can boot the system from the external device (CD/DVD/USB), or start the installation process by selecting the corresponding option from the menu. 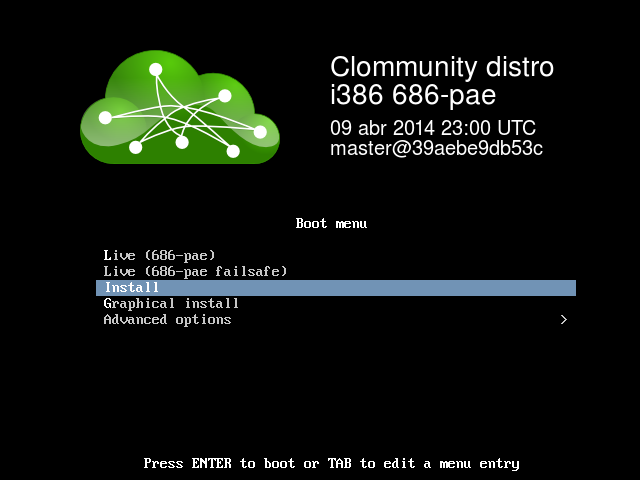 The installation is the same as a standard Debian[18], and the steps can be sumarize in:

Below you can see what processes are currently available in Cloudy to be configured easily through the web interface.

"NOTE: each service is explained in the Cloudy website[19]" 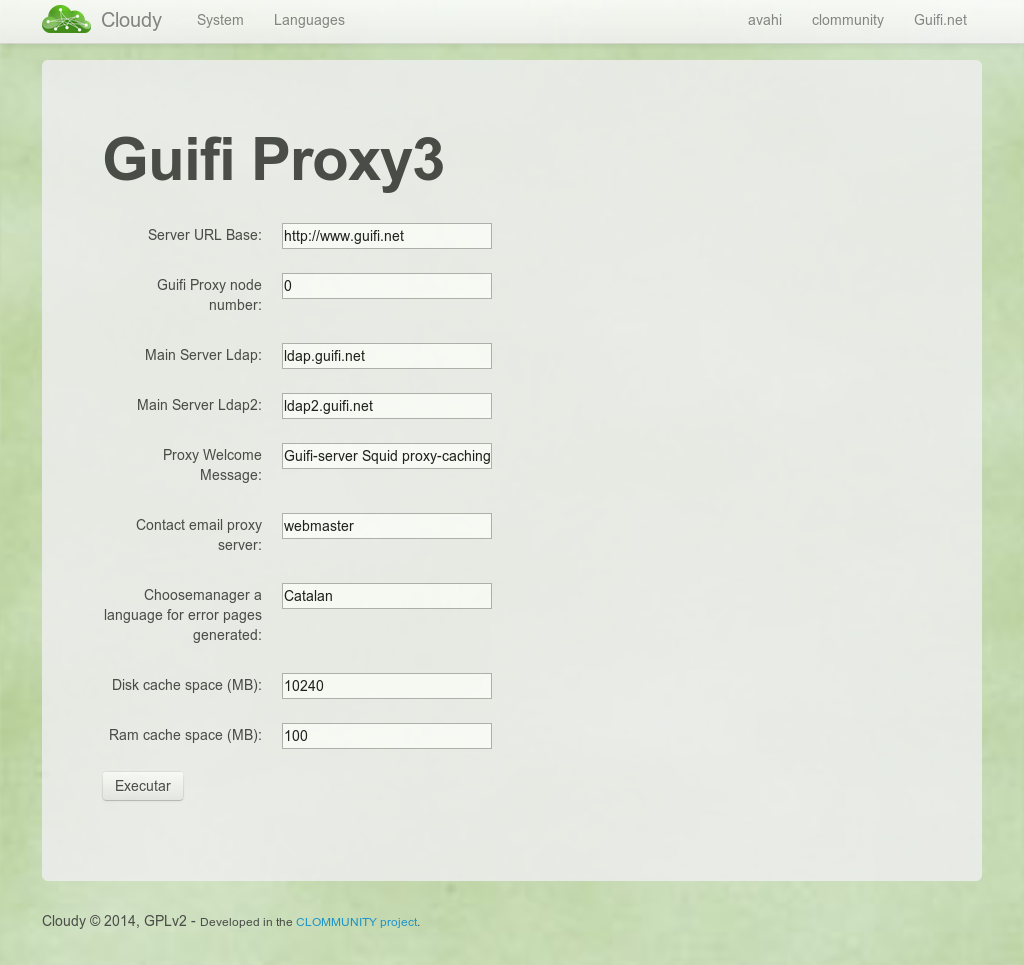 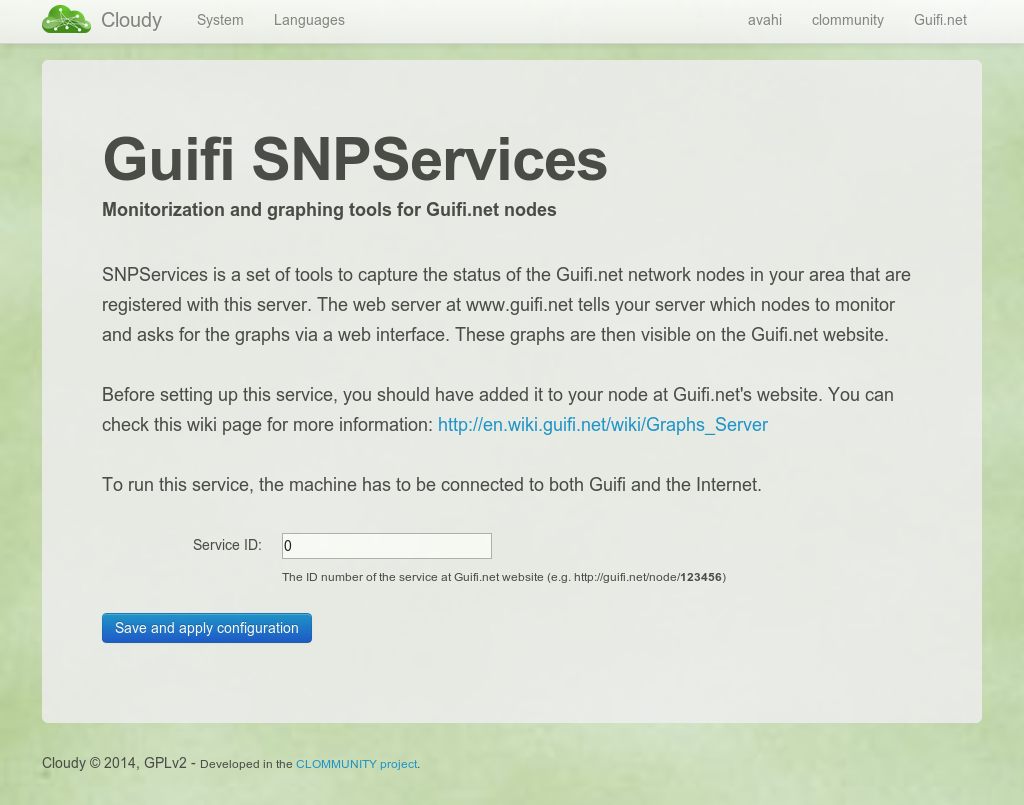 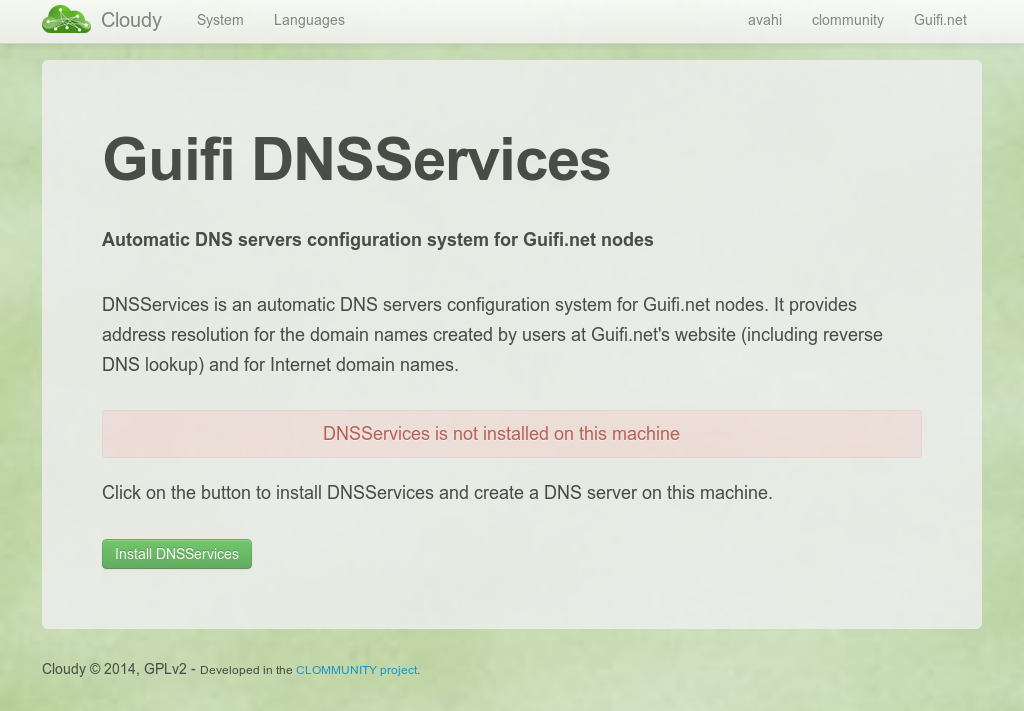