Difference between revisions of "User:Pablog/GSoC2012/Guifi.net Studio"

In order to understand better this project, you need to know first what is CNML. You can have a look to this article.

My proposal is developing a desktop application to manage these files. I will be useful for people that administer zones, workers that install Guifi.net nodes... etc.

CNML files offer a lot of possibilities that are not being exploited actually. It can also be used for statistics, data visualization, which will help people in their studies, or thesis about libre networks.

This application will load a CNML file and show its contents in friendly windows. Users will be able to filter nodes or zones by name, coordinates or hardware used.

It could also be a first step to develop a client that allowed users to modify their nodes by means of an API without having to use their web browsers.

It will also use some library (not decided yet) to show nodes in the world map like OpenStreetMap (OSM). In particular, OSM would allow final users to visualize nodes in the map without requiring any Internet connection as the maps are free and can be cached in disk.

Another interesting function would be implementing 'unsolclic' in CNML Explorer, so that users could also generate their configuration files for their nodes offline and administrators could debug better network configurations.

I will develop it using Python and GTK as I already control and have experience in both. It would be cool to write it in Vala, but it would take me more time learning Vala as I don't actually know too much about it. I prefer to focus on the functionalities and Python is a language that permits you to develop quickly.

The project license will be GPLv3+.

The idea of this project came to me during Summer 2011 and I started it. Unfortunately I couldn't spend much time on it, so what I did is only a proof of concept. Working on it full time during the Summer 2012 would be amazing :)

You can have a look to the code in my GitHub repository[1]. As a picture is worth a thousand words, here there are two screenshots: 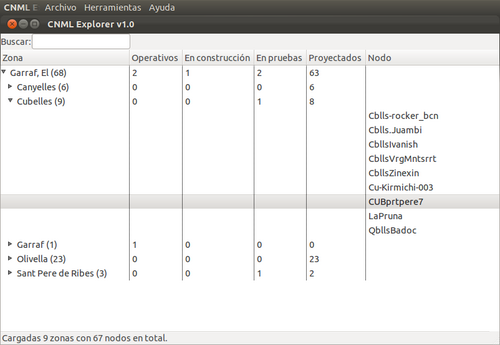 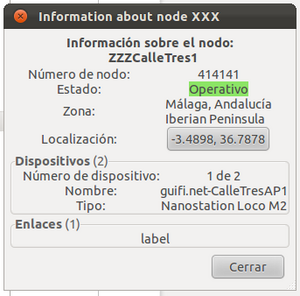 I'm currently studying Computers Engineering in the Autonomous University of Barcelona (UAB). I'm a geek and free software supporter who has been dealing with Linux since I was 13 (now I'm 23). I enjoy working in projects with social benefits. My favorite programming languages are Python and C.

Participating in GSoC is one of the things I wanted to do during my academic life. It's very exciting and Guifi.net is a big community which I like and needs more developers. Last year I tried to participate in the Mediawiki project but it was a very hasty decision and finally I didn't. You can read my 2011 application here.

These are for me the most important features. Here there's a list of more features I will implement with no particular order (I can prioritize some or implement new ones according to the community interests):

I try to fix every annoying bug I find in software daily.

I like attending to free software events. I have attended to DebConf9 and Fosdem 2010 among others.